Yes! Poinsettia pants! Sadly, I can only start wearing after Thanksgiving, and have to put them away after Christmas. 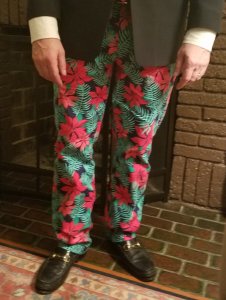 Finally got some pants from Loudmouth for Halloween. 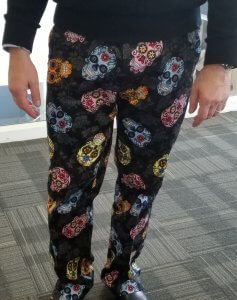 We came down to Florida for spring break to visit my parents, and I decided to visit several consignment stores, hoping to find some vintage Lilly Pulitzer pants to add to my collection. 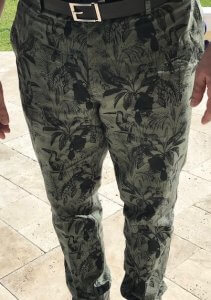 Sadly, I didn’t find any vintage pants, but we had a great time with my folks, and I brought along a new pair of pants from Bonobos to wear, making this an excellent vacation.

Apparently, I have some Scottish ancestors on my father’s side… I’m not a 100% sure about that, but still, since it’s January in Minnesota, which means it’s cold and dark, I thought I’d break out these “Black Watch” tartans from Bonobos… although I’m not a 100% sure they’re black watch. (I am color blind.) 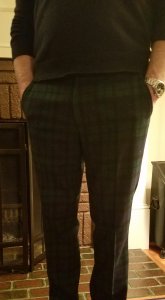 Speaking of Bonobos, it’s looking like I won’t be buying too many pants from them in the future. They were bought out by Walmart last year and seemed to have stopped making “limited edition” pants. Not 100% sure about this, but I’m guessing pink paisley was just too much for Bentonville, Arkansas.

But I am 100% sure it is cold and dark here in Minnesota.

November came and went in the blink of an eye and I completely forgot to post a picture of these “camo pants” from Bonobos. 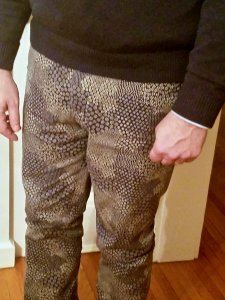 Now December is almost over as well, the new year is hours away, and subarctic temperatures have arrived in Minnesota. So, that can mean only one thing: it’s time to break out the big, bad, plaids! 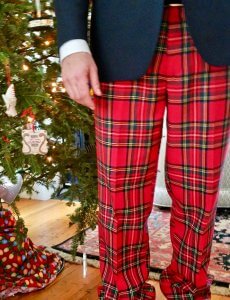 These tartans, from Castaway Nantucket Island, are not only warm and classic, but they go along with the tie I bought ages ago. Win-win-win!

Hope you had a wonderful Sir Isaac Newton’s Birthday and may 2018 bring you much joy and fun pants.

This pair is from Bonobos and the picture was taken with my friend Jose at his birthday party last month. (Guess which pair is mine!) 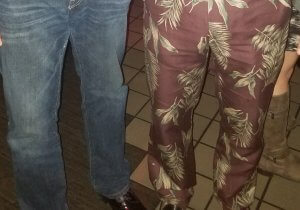 Sadly, I don’t own any awesone Halloween pants. At least not yet. I’ve been looking for a pair with a little more je ne sais quo, you know, something that isn’t just pumpkins or skulls, and I think I may have found a winner.

Fingers crossed that they go on sale tomorrow! 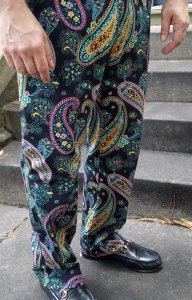 These “Power Paisleys” are from Loud Mouth Golf. I thought them fitting for this month pants since:

A) Paisley Park is here in Minnesota.

B) I just found out that WORM LOVES WORM is representing Minnesota at the 2017 National Book Festival.

How this happened is beyond me, but I’m very happy and honored to be repping the North Star State. If we hadn’t moved here I would have never discovered Hamline’s MFAC program and WORM would never have been written. 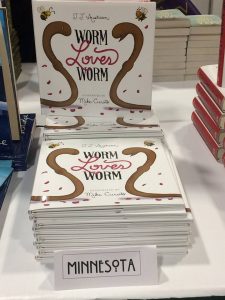 So, if you know who it was that made WORM the rep of the Land of Ten Thousand Lakes, please let me know so I can thank them properly sending them a nice note.

This pair of vintage Lily Pulitzer pants that I inherited from my dad are one of my favorites. Apparently, they were also one of my dad’s favorites as well. They’re a bit worn in the seat, so sadly I don’t break them out very often. 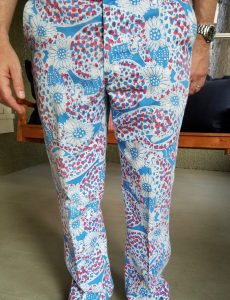 Honestly, there must be some way to recreate this pattern. Art this amazing should not be allowed to fade away. If anyone knows how to scan pants or somehow 3D print them, please let me know. 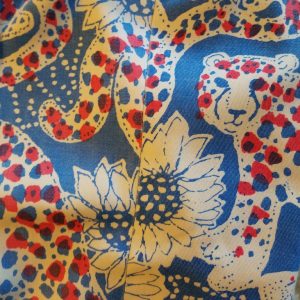 Since I used the Stars and Stripes pants last July I thought I’d go with this explosive pair from Royal and Awesome. 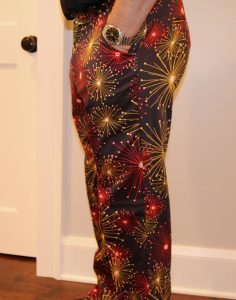 Yes, I”m still learning how to golf, yes, I’m still having fun, and, no, I haven’t killed anyone.

…but there have been some close calls with the cars in the parking lot.

These pants are from Bonobos and they also happen to be one of Laura Ruby’s favorite pairs.

Laura Ruby is an incredible author, with such great books like BONE GAP and THE WALL AND THE WING. 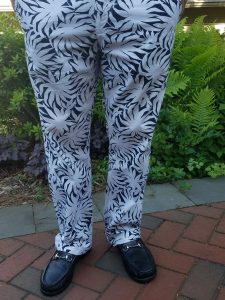 I was lucky enough to get an advance copy of her latest book, YORK: THE SHADOW CYPHER ( we share the same publisher!) and I devoured it… That is when I could get it away from my kids. YORK has everything I love in a story: The characters are fun and well drawn, the plot is filled with twists and turns, and it all takes place in an amazing alternative New York. Like I said on my Amazon review, “Yes, it is that good!”

But just after the book came out Laura posted an article at Nerdy Books Club saying, “A few weeks before the publication of my latest book and just in time for my birthday, I got a bouquet of my favorite lilies, a spa gift certificate, various cat- and fox-themed T-shirts, an i 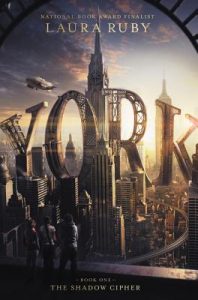 It’s a heartfelt and moving article. No surprise since she wrote it.

Do yourself a favor and read the article. And then do yourself an even bigger favor for yourself and go to your local bookstore or to Amazon or even both and buy a copy of YORK and then post a review on Amazon, Goodreads, Facebook, You’ll be doing yourself a favor by buying a great book and also helping out a wonderful author who deserves to be read.

May Pants and where I compare Neil Gorsuch to Pontius Pilate

The fleur-de-lis, according to Wikipedia, is a stylized lily ( fleur means “flower” and lis means “lily”) that is used as a decorative design or symbol. Many of the saints are often depicted with a lily, most prominently St. Joseph. Since France is a historically Catholic nation, the fleur de lis became commonly used “at one and the same time, religious, political, dynatic, artistic, emblematic, and symbolic,” especially in French heraldry.

So, I thought these pants, from Bonobos, naturally, would be a good fit for me, since: 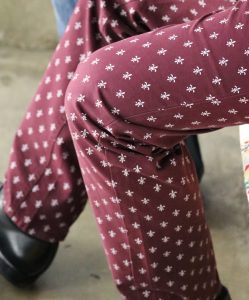 -My middle name is Joseph.

-I was born on All Saints Day.

-I was raised Catholic.

But, I now worship as an Episcopalian, since, as you may have guessed, having written a book like WORM LOVES WORM, I believe in marriage equality. I also think women should be allowed to be priests, clergy should be allowed to be married, and that everyone should be welcome to receive communion. Even Judge Neil Gorsuch, who also was raised Catholic, now worships as an Episcopalian, and whose very first decision as a Suprem Court judge was to let a man be killed.

Now, I don’t claim to be the best Episcopalian, or the best Christian, but even I know that Jesus thought all life was sacred, and I know that he was executed by the state.  I think someone needs to take Neil aside and explain to him that Pontius Pilate is not someone to model your career on.

Especially since the Episcopal Church has been against the death penalty since 1958.

April Pants of the Month and where I win an award 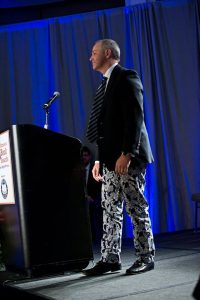 The pants are from Bonobos and the award I won is from the Friends of St. Paul Public Library.

The photo on the left shows me accepting the Minnesota Book Award for Children’s Literature and saying that my winning was crazier than my pants. Honestly, I didn’t think WORM LOVES WORM was going to win at the April 8th awards ceremony. 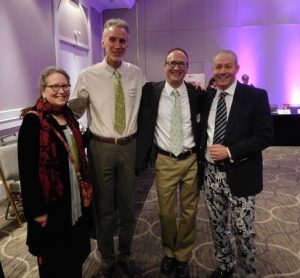 The other photo is me with the other nominees, who are all amazingly talented authors/illustrators: Lauren Stringer, David LaRochell, and Mike Wohnoutka. (The other nominee, Alison McGhee, couldn’t attend.)

Not only are they enormously talented authors/illustrators but they’re also wonderful people who have welcomed me into Minnesota’s amazing KidLit community.

And, yes, I know, it’s been more like “pants of the every now and then, when J.J. remembers to update” rather than “pants of the month.” I promise to be better about updating the blog. If, at the beginning of next month, there are no new pants, then please send me a reminder. Or two.

This year I decided to take up golf and had only three goals:

Happy to report that 911 was never called, I had quite a good time, and I found some great golf pants.

Fun Fact: When you travel in “fun pants,” like this pair from Vineyard Vines, the transportation security officers not only give you a big smile, they also let you keep your shoes on! 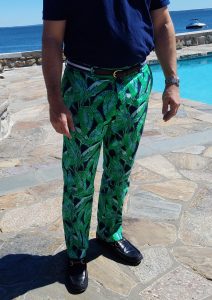 [Some might say it had more to do with my ticket being marked with TSA Pre-Check, but those who say that may just be afraid of the power of awesome pants.]

Well, better late than never, and two for the price of one. 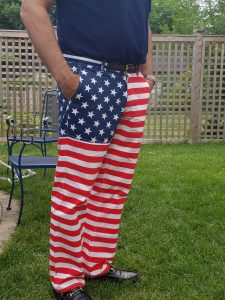 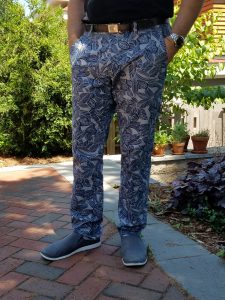 Both of these amazing pants are once again from Bonobos and I’ll let you guess which pair I wore on the Fourth of July.

And for anyone who might think wearing flag-themed pants is unpatriotic I’ll point you to this article.

Pants of the Month – May

The Trouser Shop, in Delray Beach, Florida, is a tiny, narrow, store stuffed with pants.The first time I visited the store, it was like walking into the closet of my dreams.

Naturally, my sharp-eyed children unearthed the Flamingo print pants in my size.

Bruce, the owner, was delighted to throw in a matching pink polo shirt, and I’m only too happy to throw in this link of a man on a flamingo fighting mystical black sludge.

Pants of the month – April 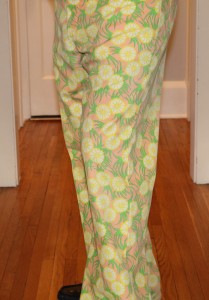 These “jeans” — called that because of the five-pocket styling? — are the cousins of the Lilly Pulitzer butterfly pants that made their debut on my website in January.

They, too, belonged to my dad and are one of his more reserved pairs of pants. Yes. That’s saying something about the ’70s. 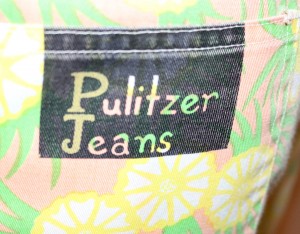 This pair of pink paisleys seems appropriate for the month of February and Valentine’s Day.

While these pants aren’t vintage, they are fun and are one of the first pairs I purchased from Bonobos. 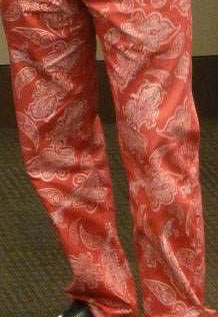 Normally, I don’t buy clothes online since I never know about fit, material, or return policy (though I’m sure it’s in the fine print!). Bonobos, however, has consistently delivered with great pants and service, and has become my main source of awesome pants. (If anyone from Bonobos is reading this, yes, I am interested in sponsorship.)

Also, one of my proudest parenting moments happened because of these pink beauties. I wore them to have lunch with my daughter at her school a few years ago and another little girl sitting at the table took one look at my pants and said, “Pink is for girls.” My daughter instantly answered back, “No! Pink is for everyone.” Exactly.

These are the bad boys that I remember most clearly from my youth and the pair that started it all. Back when I was getting my Master of Fine Arts in Writing for Children and Young Adults at Hamline University, I wore the butterfly pants to the program’s opening reception for fun.

After that, if I ever showed up to a lecture or other event in khakis or jeans, I was met with sad faces and sighs. So, I started wearing all my awesome pants whenever possible. Who am I to disappoint a bunch of award-winning Kid Lit authors?